The Women’s Winter League has ended with glories for HKFC A and HKU A last Saturday at the Knockout Tournament Finals. HKFC A beat Valley A 3-0 to retain the Knockout Cup.  In addition to winning the Premier League title for the third consecutive year, they
also won the 7-a-side and 9-a-side Tournaments of the season.

Elsewhere in the Third Division, HKU A, a new team formed by students from the University of Hong Kong, also had a clean sweep of the trophies.  They beat HKFC F 3-1 in the Bowl Competition on Saturday in addition to winning the league, the 7-a-side and 9-a-side Tournaments earlier.

In the Plate Final, Shaheen A beat HKFC D 5-1 while LHT beat Shaheen B 3-0 in the Saucer Final.  All the league and tournament trophies will be presented at the Women’s Section AGM on June 20th. 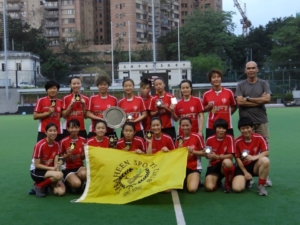 Shaheen A, prepared they would win the Plate final, brought along their club banner for a photo after the prize presentation. 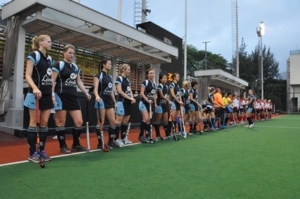 Players of HKFC A and Valley A lining up to march into the pitch.

Morale booster – a loud cheer among Valley A players before the whistle.