After second day of the tournament, Air India had ready secured a place in the finals with two straight wins but the real battle was who would take the second place with Presidents XI on 2 points, and Hong Kong and Guangdong each a point.

Despite a 4-2 margin in the second half, the Presidents XI could not hold on to the advantage and allowed Guangdong to come back with a field goal and a penalty corner just over one minute on the clock.   Presidents XI have yet to play their toughest match against Air India on Saturday and would try hard to limit the goal deficit!  The Hong Kong against Guangdong match on Saturday would likely be the actual decider on who would be in the finals.

The Hong Kong team performance was steady against Air India but it was not enough to stop the well drilled professionals from tucking in 7 field goals and 2 penalty corner conversions.  Hong Kong goals were scored by Alamgir Khan in a penalty corner and Ishtiaq Ahmed scored a penalty stroke as he was brought down by Air India keeper. 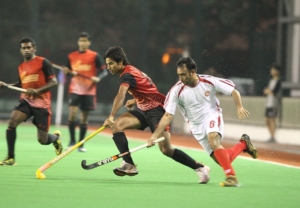