The full Air India side proved to be too strong for any team in the quadrangular tournament this year and Guangdong had to be contented with a silver second year.  World Cup star Vikram Pillay broke the Guangdong defense line just 3 minutes in to the match.  Guangdong without their national players was clearly disoriented by the Indian fast attack playing style which was not common on the mainland.  Before half time, Air India was 6-0 ahead.  Guangdong was able to save the second half without conceding more goals thanks to their acrobatic goalkeeper ZENG Jun who could easily be the man of the match.

In the bronze medal match, President XI came back from 0-2 to level the scores against the Hong Kong team and took the match to extra time.  President XI Saddhar Gurdeep Singh scored a revised stick shot from the narrowest angle along the backline to end the match on a golden goal. 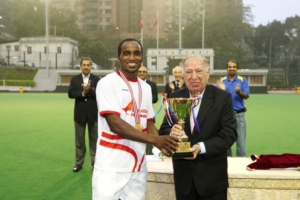