The 5th Men’s Asian Hockey Federation (AHF) Cup is due to kick off on 19 November 2016 (Saturday).  The AHF Cup is one of the biggest hockey events in Hong Kong.   We held the event in 1997 and 2002 and were crowned champions.   This year’s Tournament will feature 8 teams, namely Bangladesh, Chinese Taipei, Hong Kong, Macau, Singapore, Sri Lanka, Thailand and Uzbekistan.  Bangladesh being the top seeded team and defending champions is expecting to put pressure on all the teams of the Tournament, the winners of which will be qualified for the Asia Cup to be held in 2017.

FIH has just announced the latest match schedule after several late withdrawals.   Hong Kong is placed in Group A and will be playing their toughest pool match against Bangladesh on the opening day.  Hong Kong coach Mark Kake says Hong Kong is definitely playing all out for that match and all our players are aiming among the top three spots of the Tournament.

We look forward to seeing all the hockey fans at King’s Park to lend your supports to our Hong Kong team at the Tournament. 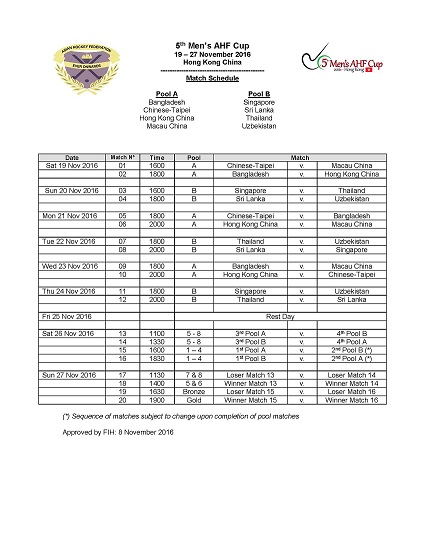