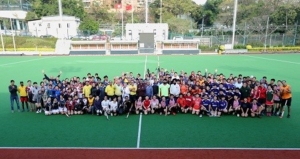 A capacity crowd turned up at the King’s Park Hockey Ground and Club de Recreio on 13 February 2013 to partake in the Con Conway Memorial Tournament. A total of 20 teams participated in the 9-a-side mixed hockey festival played under glorious sunshine. The day’s honours went to:

The occasion was graced by the presence of Guest of Honour, Carlye Tsui, wife of the late Con Conway, who presented the trophies and medals to the 4 teams.