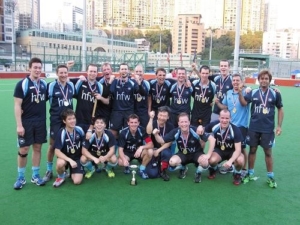 HKFC was crowned the Premier League Champions of the season.

The Men’s Premiership title this season could go either way to Khalsa Sports Club (Khalsa) or Hong Kong Football Club (HKFC) with
everything boiling down to the final match.  Khalsa played its last match earlier yesterday beating HKFC B by 7-0 giving Khalsa a narrow one point lead and a better goal difference ahead of HKFC A who was due to play against Shaheen in the following match.  Even a draw with Shaheen would mean handling the league title to Khalsa.

A 1-1 tie at half time came to a surprise to the spectators and Shaheen’s chance for an upset was not all impossible.  In the all or nothing second half, HKFC turned up the steam and two well worked penalty corners caused damage to Shaheen’s defense widening the lead to 3-1.  A controversial penalty stroke was awarded to Shaheen which revived the hope of an upset.  HKFC continued the pressure and sealed two more goals for a convincing victory of 5-2.  HKFC was crowned the Premier League Champions of the season and their last title was in 2006-07.