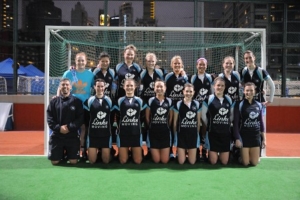 HKFC A claimed the Women’s Premier Division title, retaining the crown for the third consecutive year.  They have won 14 out of 15 matches and the only draw was with KCC A in the first round, snatching 43 points in total.  Their closest rival, KCC A on 34 points, was able to keep the chase until they lost to HKFC A and Valley A in January.  The last premier league match between HKFC A and KCC A then became a formality.  HKFC A beat KCC A 7-0 on March 10th and sealed the title emphatically.

Both HKFC A and KCC A are on course for another fight in the Cup Competition.  The final of which will be held on May 5th together with the other trophies of the Knockout Tournament at stake on the same day.