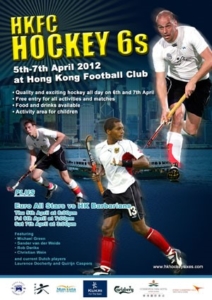 The HK Hockey 6’s returns to the Hong Kong Football Club for its 3rd year over the Easter weekend in April.  The main tournament held on 6th and 7th April will feature the top men’s and ladies club teams in Hong Kong as well as a number from across Asia Pacific, including Indonesia, Australia and China.

As a further development towards becoming a full international tournament, there will be an International Series played throughout the weekend along side the main tournament.  This will feature three matches between a Euro All Stars team and the Hong Kong Barbarians – a culmination of the best players in Hong Kong.

The Euro All Stars boast some of Europe’s best players of recent years, including Michael Green, FIH Player of the Year in 2002 and winner of 320 international caps for Germany and fellow German star, Christian Wein.  Sander van der Weide returns following last year’s exhibition match and is joined by his Dutch compatriot Rob Derikx.

Significantly, there are two current Dutch players joining the team – Laurence Docherty and Quijijn Caspers, who are using a brief break in training for Olympics to come to Hong Kong.

In addition to their playing commitments, the stars will be conducting a number of coaching clinics for young players in Hong Kong whilst they are in Hong Kong.

Charles Poulton, Chairman of the HKFC Hockey Section commented, “It is great to have the Hockey 6’s back again and to see it growing year on year.  Last year’s exhibition match showed what an exciting format 6’s can be.  With the quality of players coming this year, it plans to be an exciting and social event, with lots of fast action and spectacular goals”.