The British Army completed their 3 games tour of Hong Kong with a very competitive and entertaining match against the HK Barbarian’s. Played at HKFC on Monday 12 December, the Army boys were confident having drawn 3-3 with HKFC A on the previous Friday night and putting away a HKFC Coach’s Select 4-2 on Sunday, but were just one par under the HK Barbarians on the night.  The British Army team (led by ex GB international Guy Fordham) will now head to Malaysia before returning home for Christmas.

The Barbarian’s, captained by Asghar Ali (Shaheen) were first to score with a well executed short corner goal to his brother Arif Ali. However, not long after it was 1-1 because the Army also scored from a well executed short corner. Late in the first half, Harry Bal (KCC) found the net after a quick counter attack play, and the home team went into the break 2-1 up. The Barbarian’s star studded line-up were able to build some early momentum after the break and went up 3-1 with New Zealander Ben Glynn (Valley) scoring first before dramatically conceding twice, with the Army pushing forward in numbers and applying a lot more pressure up front. Both goals were brilliantly taken and well deserved. Sensing a pattern to similar from the Friday game, the coach of the Barbarian’s Simon Chapman was quick to make some changes off the bench, and soon after the momentum swung back in favour of the Barabarian’s. After several amazing saves from a multi due of angels the goal keeper was finally beaten by a sublimely struck shot from the skipper. The Army goal keeper had an amazing game and was without doubt the players of the match for his relentless defiance. Unfortunately for both him and the Army side though, the pressure finally resulted in reward (for the Barbarian’s) and with only moments to play the opportunity to beat the local stars had slipped. 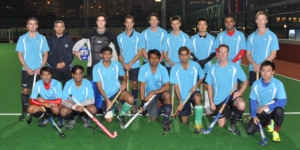 FIH Player of the Year shortlists announced
Scroll to top