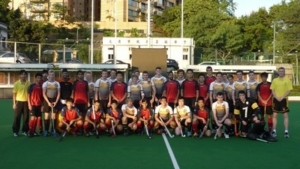 Hong Kong recorded its biggest win ever against Macau since the interport series started in 1934. At the King’s Park Hockey Ground on Sunday 19 June, Hong Kong overwhelmed Macau by 8-0. It surpasses Hong Kong’s previous big win of 6-1 against their opponents in Macau in 1965, soon after the squad’s return from the Tokyo Olympics 1964.

Hong Kong took early control of the play and kept the Macau boys in their half of the pitch most of the time. Hong Kong led 5-0 at half time. Harry Bal’s second half hat-trick took the final tally to 8-0. Ishtiaq Ahmed, making his debut for the Hong Kong team, scored 2 goals in the first half and delighted the crowd with his skills.

In the preceding matches, the Hong Kong Veterans beat Macau Veterans 4-3 in a closely contested match, retaining the title for the fourth time in succession.

The Macau contingent however did not return home empty handed. Their Juniors (Under -21) once again defeated the Hong Kong Juniors 3-2, a repeat of last year’s result. Macau took the lead twice, only to be pecked back 2-2. The match was heading for a draw until the 66th minute when Macau’s captain, WONG Chong Nam, converted his second penalty corner to lift the Cup.