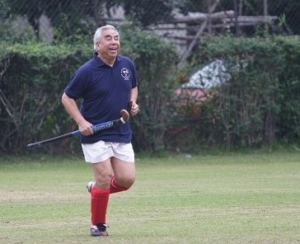 Many players may wonder for how long they can continue having matches week in week out.  The answer is: many more years.

The most senior player in the league, Kader Rahman, will celebrate his 75th birthday this month.  He is currently playing with IUHK in the 6th Division, trying to help Islam youths get on in the sport.

And in the previous decades of his hockey career, it’s all about giving.

Whether he plays or coaches, he gives his best. He has played for a variety of teams including Sir Robert Black, HKU, Recreio, HKFC, Sookunspot, IRC, Correctional Services, and Islamic Youths.

He has also coached many teams, including the HKU student teams.  In the late 1970s, he started coaching the HKU students, voluntarily, in preparation for the TIG (Triennial Intervarsity Games).  From then on, hockey has become a major sport in the inter-hall competition.   Although his work has prevented him from coaching after 1988, he is happy to see many more Chinese teams in the league and many of them from HKU. 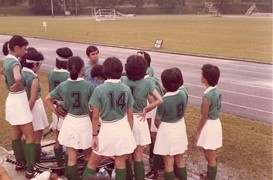 Taking HKU hockey teams to Singapore in 1982 for the 17th TIG.

Born in Hong Kong to Malaysian parents, Kader started playing hockey when he was studying in Sir Ellis Kadoorie School as a young boy of 11.  He then went on to study in Queen’s College where he represented the school in both football and hockey and won the school league.

The Hong Kong Hockey Team at the 1962 Asian Games.  Kader is 6th from the left in the back row. 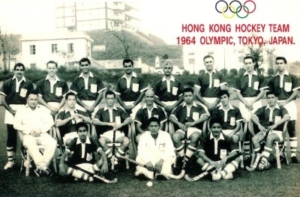 The highlight of his career was representing Hong Kong in the 1964 Tokyo Olympics.  And with him were two other Queen’s College students, Sarinder Dillon and Kuldip Singh.  Harnam Grewal, was then a teacher at Queen’s College in 1964.

He represented Hong Kong many times, played one Olympic Games, three Asian Games, Interport games, Vets Tournaments and so on.  He enjoyed every bit of it, including a draw with Germany in the Olympic Games, a winner against South Korea (previous bronze medalist) in the 1962 Asian Games. 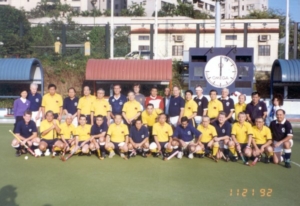 The game of hockey has transformed with the introduction of astroturf and new rules.  According to Kader, the game was much more focused on technique in the past.  The Indians and Pakistanis then dominated.  Now the game is more focused on physique and the Europeans were on top.  Albeit this change, he will continue playing, staying fit and enjoying the sport. 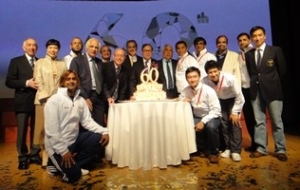