The busy week of hockey concluded yesterday at King’s Park with Korea’s Inje University taking the winner’s trophy of the 1st Women’s Invitational Tournament.   They beat Chinese Taipei, Shenzhen, and Keio University (Japan) before they drew Hong Kong 2-2 on Saturday to come on top of the round robin stage.  They faced Hong Kong again in the final on Sunday and won 2-0. 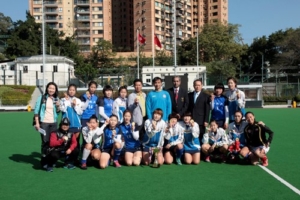 Inje University Team had the majority of possession and goal scoring chances and they grabbed two quick goals in succession, in the 20th and 27th minutes.   In the second half, our very own Hong Kong, China team, with the support of the home crowd, put on a strong defense.  Claire Archer, the home team goalkeeper, made some tremendous reaction saves and helped keep a clean sheet. Although the home team created some good counter attacks late on, there was not enough time to turn the match around.

In an earlier match, Chinese Taipei beat Shenzhen 8-3 to take the bronze medal.  With the success of this tournament, the HKHA Women’s Section looks forward to organizing other events in the near future.