The Women’s Section has worked hard to secure opportunities for international exposure for our junior squads. And the players are going to be very busy this spring.

The Under 16 squad will be attending the International Easter Hockey Tournament (www.iet_online.nl) in Valkenswaard, The Netherlands on the 3rd and 4th April. There are 16 boys teams and 13 girls teams participating in this tournament. Apart from the Tournament, the Hong Kong team will also play against some Dutch Club teams while they are in The Netherlands.

The Under 14 Squad of 26 players will go for a training tour to Singapore from April 8th to 11th. Beside the training, the squad will also play matches against The Under 13 and Under 14 teams, including two of the top Singapore schools.

In order to fund these trips, the Netherlands team and the Singapore team held a sponsored run yesterday at the Peak (photos above). Each player ran three to four laps along Lugard Road, making distances of up to 14km. The participation of the players and the amount of sponsorships collected were encouraging. The juniors will now turn their eyes on intensive training before the trips. 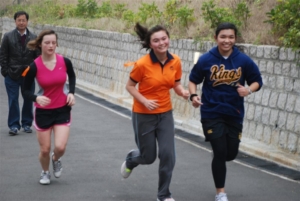