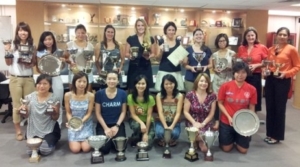 The 2012 Women’s Section AGM was held on June 20th.  Club representatives gathered together to go through the reports of the season and shared comments during an open forum.  A new committee was elected and prizes were presented to winners of the league and tournaments.  Individual awards were also announced.  This year, the top scorer trophy was created for premier division.  We hope that clubs will continue entering scorer details as we look to present top scorer trophies for the rest of the divisions next year.